It is widely known that the antioxidants lutein and zeaxanthin help keep the eyes healthy. What is less known is that they also improve the circulation of blood to the brain which helps halt cognitive decline.

The brain needs blood flow to function properly. The blood-brain barrier allows select nutrients through. Without enough oxygen and nutrients, brain cells die. In the worst case, the brain shuts down and the person dies. Neurodegenerative diseases such as Alzheimer’s disease have been linked to impaired cerebral blood flow.

There is a direct link between the eyes and the brain. When doctors examine the retina and optic nerve they are looking directly at brain cells. The retina consists of certain plant pigments that are good indicators of visual health. Two of those pigments are carotenoids called lutein and zeaxanthin.

What are Lutein and Zeaxanthin

Both are xanthophylls, a class of carotenoids, which are antioxidants that fight free radical damage. These antioxidants occur in nature and are found in certain foods.

Foods high in lutein have an orange, green, or yellow color. The yellow pigment is key to lutein’s value as it absorbs blue light. Blue light is very damaging to the eye because it causes oxidization. The eye has tiny structures, and free radicals can cause significant harm, leading to diseases such as cataracts and macular degeneration. For this reason, lutein is sometimes called “eye vitamin”.

Zeaxanthin is another antioxidant found in the retina and in the lenses. Paprika, corn and marigold flowers are high in zeaxanthin.

How do they work

Like all xanthophylls, lutein and zeaxanthin can immerse themselves into the membranes of fatty brain cells. They cross between the interior and exterior environments. Therefore, the cell structure is stabilized and protected from oxidative damage.

The University of Georgia researchers carried out the first-ever randomized, controlled trial to test whether supplementation with lutein and zeaxanthin might be beneficial for cognitive function in older people . They had two important findings: 1) The two nutrients produce a “brain maintenance effect” by shielding against the impact of aging on cognitive performance. 2) They enhance brain blood flow in the specific areas that support that cognitive function.

Most Americans get only 1-2 mg of lutein in their diets. Studies suggest at least 10 mg of lutein and 2 mg of zeaxanthin for macular degeneration prevention and retinal support. Seniors absorb nutrients less efficiently and may need higher dosage for full protection.

We recommend the following supplements: 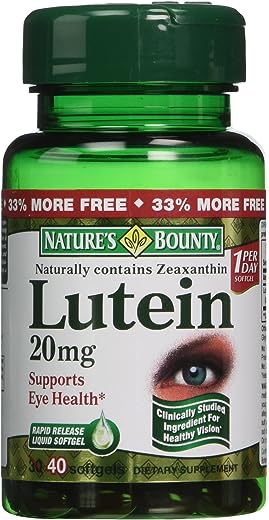